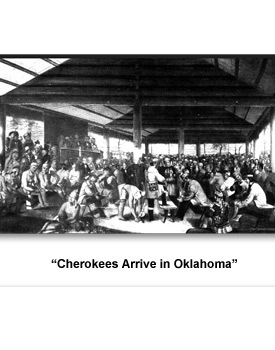 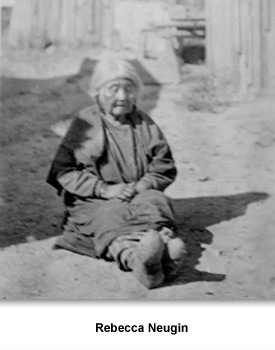 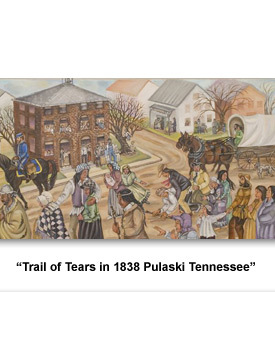 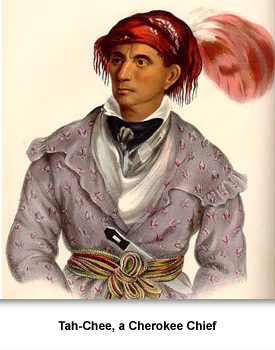 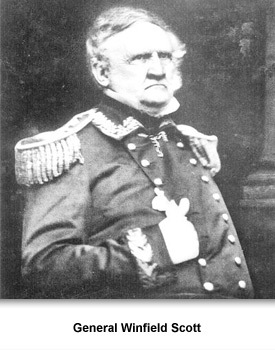 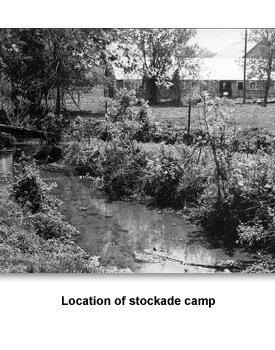 In 1838, Major General Winfield Scott was put in command of 7,000 soldiers whose job was to remove Cherokee Indians from their lands in Tennessee, North Carolina, Georgia, and Alabama.
There were around 15,000 Cherokees left in this area.  Ever since the passage of the Indian Removal Act of 1830, Indians had been leaving the southeastern U.S. and traveling to west of the Mississippi River to lands that had been designated for them in Oklahoma.
In May 1838, Scott’s soldiers rounded up all the Cherokees from their homes and imprisoned them in stockades. There were three stockades located in Tennessee were at Cleveland, Calhoun and Ross’s Landing.

The Indians weren’t allowed to bring very many of their possessions. A Baptist minister wrote, “Multitudes were allowed no time to take anything with them except the clothes they had on.”
Read Gen. Winfield Scott's Address to the Cherokee Nation on May 10, 1838
Rebecca Neugin was a little girl when her family was forced to leave their home. Many years later, she was interviewed about her experiences. She remembered that:
When the soldiers came to our house my father wanted to fight, but my mother told him that the soldiers would kill him if he did and we surrendered without a fight. They drove us out of our house to join other prisoners in a stockade.

After they took us away my mother begged them to let her go back and get some bedding. So they let her go back and she brought what bedding and a few cooking utensils she could carry and had to leave behind all of our other household possessions.
John Ross met with Gen. Scott in Washington about the removal. Later, Ross was able to get Scott to agree to let the Cherokee divide themselves into groups and travel with Cherokee guides. Ross also requested more supplies from Scott which were approved.
When Ross returned home, he found the Cherokee penned up in the stockade like cattle. Most of them were sick and stricken with grief over losing their homes and possessions. Ross’s wife Quatie became sick and would later die on the trail from pneumonia.
The original plan had been to move the Indians by water. The first group left by water but ran into problems due to low river levels caused by a drought. The other groups were ready to leave in September going by land, but due to the water shortage, they didn’t leave until October. Unfortunately this meant most of the trip would be undertaken during cold weather.
There were several trails used, but the main one went through McMinnville, Murfreesboro, Nashville, and Port Royal before entering Kentucky. From Kentucky, the groups traveled into Illinois and across Missouri before reaching their land in Oklahoma.
Despite efforts by Ross and the other Cherokee leaders, the Cherokees underwent great hardship on the trail. The groups suffered from weather, accidents, disease, and death on the trail. One of the Cherokee guides, Jesse Bushyhead, reported on October 21 near the Sequatchie Valley that “We have a large number of sick and very many extremely aged and infirmed persons in our detachment.”

Read more about Rebecca Neugin’s family on the trail.
Out of the 18,000 Cherokees who went west after the Treaty of 1835, it is estimated that approximately 4,000 died in the stockades or on the trail. The Cherokees call it Nunna-da-ul-tsun-yi, which means the place where they cried. In history it is known as the Trail of Tears.
After most of the Cherokees arrived in their new western lands, they faced many problems. Divisions between people who favored accepting removal and those who fought against it remained. Cherokees faced a time of violent struggle. By the late 1840s, the tribal leadership became more unified. The Cherokees began to rebuild their society.
Today, the Trail of Tears National Historic Trail is maintained by the National Park Service. Preserving the routes southeastern tribes traveled when removed to the West helps people today learn about this important part of our nation’s history.
Click here for the Trail of Tears National Historic Trail
Read more about the Trail of Tears