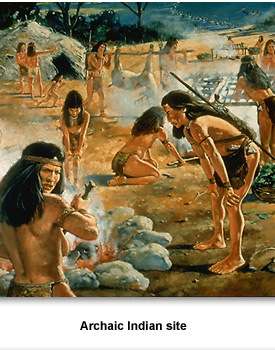 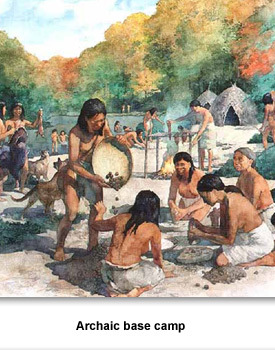 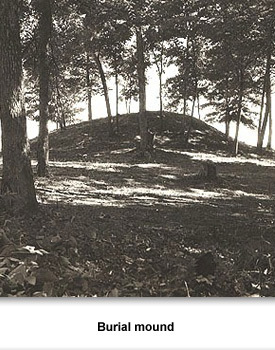 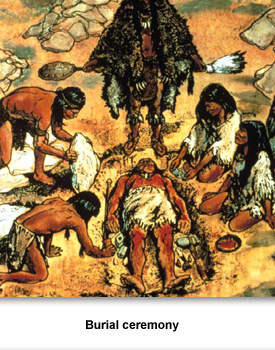 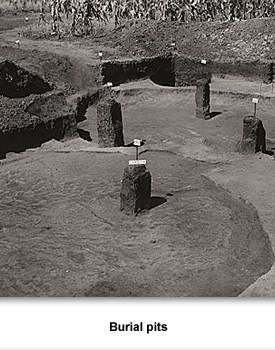 How Did They Live?

The early Archaic people seem to have been divided into river-based large family bands. This group would break up into smaller family groups for most of the year, occasionally coming together as a large group at a base camp, usually in the fall.
In the middle Archaic period, there seems to have been a change in this pattern in several areas including the lower Tennessee River Valley. Large sites with thick deposits of midden (shell trash pits) and domestic-related items have been found.
Archaeologists have found complex hearths (fireplaces) that were carefully prepared and reused, suggesting permanent habitation. The Anderson site in Tennessee had several circular areas of flat limestone that could have been floors for housing.
By the late Archaic period, there were fewer and larger base camps where at least some of the people lived year around. The shell middens show a large number of domestic artifacts and burials.
The Archaic Indians were not only hunters but they also gathered food from nature. The abundant forests and fields of Tennessee offered plenty of plant life to eat. They gathered fruits, berries, roots, nuts, and seeds to supplement their diet. They also gathered mussels and caught fish from nearby rivers.
Cooking and Storing Food
The first food containers were gourds. The Archaic people began using these around 5,000 B.C. Gourds and squash were the first plants cultivated by humans in Tennessee during this period.
These gourds were not eaten but were used to store food. The earliest known plant cultivated in Eastern North America has been traced back to the Anderson site in Middle Tennessee.
Archaic Indians also developed stone bowls. These bowls were made out of a soft stone called steatite or soapstone. These stone pots were very common in East Tennessee during the Middle and Late Archaic periods. These stone pots could withstand heating and cooling without cracking and made them ideal for cooking.
The first pottery storage vessels appeared around 2,500 B.C. The earliest pottery was found along the Atlantic coast. It slowly spread from there westward. Most pottery during this period was simple compared to later cultures.
Bone Artifacts
Animal bones and antlers were very important to the Archaic Indians. Large numbers of bone and antler artifacts have been found that tell archaeologists a great deal about the lives of Archaic Indians. For instance, many tools, like hammers, hooks, and flakers, were made from bone or antlers.
Some bone tools were used to make clothing. Splinters of deer and turkey bones were made into awls. Awls were used to punch holes in animal hides. They also made pins and needles out of bones.
Archaic Indians even developed fish hooks out of bone. Teeth of rodents, dogs, and sharks were used to carve wood or bone. Animal teeth were also drilled and used as personal ornaments or jewelry.
Burial Customs
Very few human remains of the Early Archaic Indians have been dis-cover-ed. The Icehouse Bottom site at the Tellico Reservoir is the only site where burials have been dis-cover-ed. The Archaic Indians that lived in this region cremated, or burned, the remains of their dead. The charred fragments of two female bodies have been re-cover-ed from Icehouse Bottom.
Over thousands of years the Archaic Indians became better at hunting and gathering food. Because of this, their population increased as they lived longer and had more children. For this reason, archaeologists have found more burials from the Middle and Late Archaic Indians.
These burials are different from the earlier ones. The bodies are buried without being cremated first. They also buried many artifacts with them. In some excavated burials, men were found with atlatls, projectile points, and shell ornaments. Women have been found with bone tools for making clothes.


First Tennesseans >>  Who lived in Tennessee >>  Archaic Indians >>  How Did They Live?