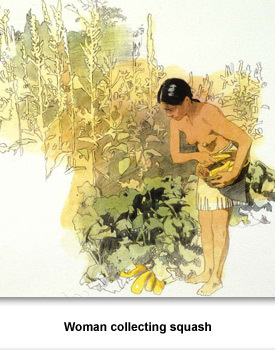 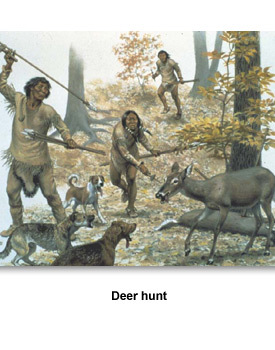 The Archaic Indians developed several new tools that have not been found in earlier cultures. When the mastodon and other Ice Age animals became extinct, native people were forced to adapt, or change.
Instead of hunting large herds of mastodons, they were forced to hunt smaller, quicker animals. Hunting these smaller, faster animals required new technology. One of the new tools the Archaic Indians invented was a weapon called the atlatl.
The atlatl was a tool used to throw a spear farther and faster than a human arm could. The spear or dart would be loaded onto a stick about two feet long. At one end the hunter would hold the handle. The spear would be the other end. With a flick of his arm the spear would launch out of the atlatl toward the prey. The atlatl helped the hunter become a more effective hunter.
Spear Points
Archaic hunters developed spear points of different sizes to kill different types of animals. Large spear points killed large animals like deer and buffalo. Small spear points killed smaller animals like turkeys or rabbits.
The major difference between the Paleo spear points and the Archaic points is the triangular shape of the Archaic points. The Archaic points also have notched sides that would have been used to tie to the spear.
Polished Stone
The Archaic people were the first peoples in America to polish and shape stone into smooth shapes. Many of these smooth stones were used as weights to make atlatls more effective.
Other stones were used in ceremonies or as ornaments. Ornaments became popular during the Middle Archaic Period. These stones are called celts.
Weaving Baskets and Nets
Archaic Indians also developed the first methods of weaving. At Icehouse Bottom site in the Tellico Reservoir, archaeologists found impressions of baskets and netting on hardened clay.
These impressions date back 10,000 years ago and are the oldest evidence of textiles dis-cover-ed in Eastern North America.