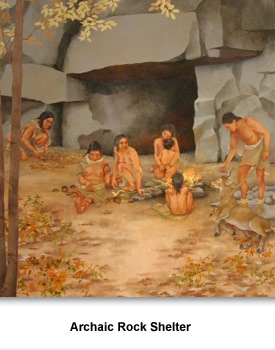 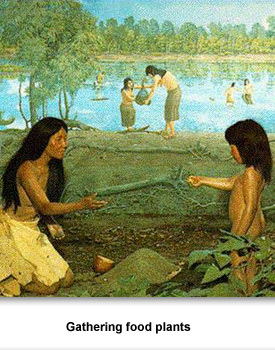 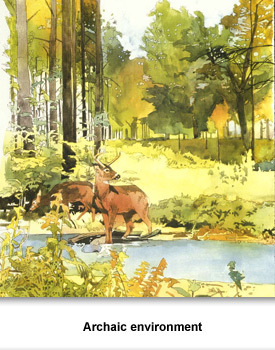 About 10,000 years ago, the earth began to warm up. The Ice Age came to an end.
Animals and plants either adapted (or changed) to this new environment or became extinct (died out). Many Ice Age animals like the Mastodon disappeared from Tennessee forever.
The Paleo-Indians living in Tennessee also were forced to adapt to the new environment. When the mastodons and other large Ice Age animals disappeared, Indians began hunting smaller animals that are more common to Tennessee today like deer, turkey, and ducks.
Because these animals exist in great quantities throughout Tennessee, there was no need for the Indians to travel great distances to hunt. Therefore, they became less nomadic (moving from place to place to live) which means they remained in one region for longer periods of time.
The people who lived in what is now Tennessee changed their ways of living, hunting, and customs. So even though they were the descendents of the Paleo-Indians, they became so different that archaeologists gave them a new name.
They were called the Archaic people or hunter-gatherers. Archaeologists refer to them as hunter-gatherers because it describes how they got their food. They hunted many types of animals and they gathered food from the land around them.
The Archaic people were also inventors and innovators. They introduced never-before-seen technologies to their culture. These innovations helped them hunt and store food. Significant innovations include the atlatl, polished stone, and pottery.
When did they live in Tennessee?
The Archaic people lived in Tennessee for thousands of years from about 8,000 B.C. to about 1,000 B.C.  They first began to settle in this region about 10,000 years ago (8,000 B.C.)
Their culture survived in Tennessee longer than any other culture, including our own. Because they lived in our state so long, archaeologists divide the Archaic period into three stages: Early Archaic (8,000 B.C. - 6,000 B.C.), Middle Archaic (6,000 B.C.-4,000 B.C.), and Late Archaic (4,000 B.C.-1,000 B.C.).