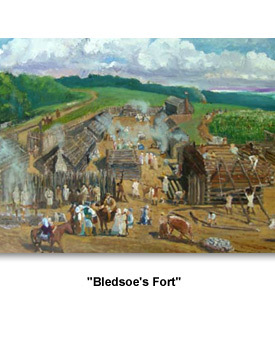 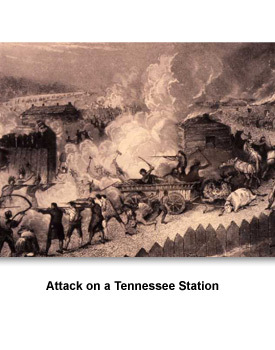 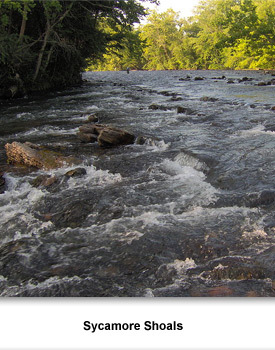 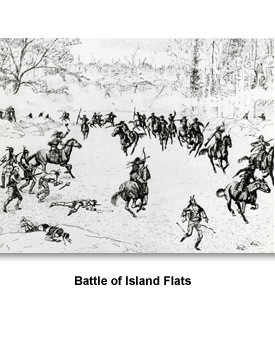 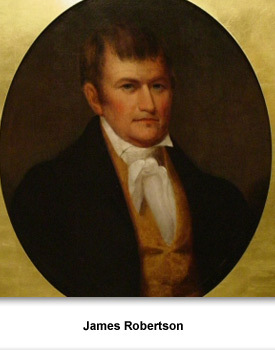 The first group of white settlers moved into the Watauga or Sycamore Shoals area (now Elizabethton in Carter County) around 1768. William Bean and James Robertson were the early leaders of this group.
Others moved next to the Nolichucky River (now Erwin), Carter’s Valley (between Kingsport and Rogersville), and North Holston (now Bristol).
The first settler in the area that is now Knoxville was James White in 1786. He and James Connor built a fort named White’s Fort on the banks of First Creek. In 1790 White’s son-in-law, Charles McClung, drew up lots for the establishment of a town. It included land for a school chartered as Blount College—which later became the University of Tennessee.
Judge Richard Henderson of North Carolina and his friends formed a land company called the Transylvania Company. Their purpose was to obtain large tracts of land in Kentucky and Middle Tennessee from Indian tribes. This land would then be sold to settlers. In a 1775 meeting at Sycamore Shoals with more than 1,200 Indians, Henderson persuaded the Cherokees to sign a treaty giving his company 20 million acres.
Dragging Canoe, the son of one of the Cherokee leaders who signed the treaty, tried to talk the leaders out of signing the treaty. He, correctly as it turned out, warned the Indians that they were signing away their ancestral lands and that the whites would want more and more land. He supposedly told the whites that they were purchasing a “dark and bloody ground.”
Conflict between the settlers and Indians broke out the following year. Dragging Canoe led an unsuccessful attack on the North Holston settlement. Others attacked settlements at Carter’s Valley and Watauga. All were turned back.
Settlers built forts as protection against Indian attacks. In East Tennessee, settlers fled to the nearest fort until the danger passed. They then returned to their homes. But in Middle Tennessee, most of the settlers lived in forts every day for safety from 1780 until around 1795.
Middle Tennessee
Although many called his Sycamore Shoals treaty illegal (and eventually the Virginia Assembly voided it in 1776), Henderson persuaded James Robertson and John Donelson to establish a settlement on the Cumberland River in Middle Tennessee. The men decided on French Lick (now Nashville) as a good location. Robertson took about 100 men by horseback in 1779 to the site to build shelters for their families coming by river.
John Donelson led the party of 200 men, women, and children on boats by water. Donelson had about 30 to 40 boats of different sizes including his boat, a large flatboat he named The Adventure. The group left East Tennessee in December of 1779 and arrived in Nashville four months later. Along the way they had to battle smallpox, frostbite, and an Indian attack. Click here to read more about the journey from John Donelson's diary.
Many of the families lived in or near the fort built by Robertson (named Fort Nashborough) because of the danger from Indian attacks.
Charlotte Robertson was proclaimed the heroine of the Battle of the Bluffs fought at the fort in 1781. When Indians attacked the fort, she realized that they were between the fort’s men out in the woods and the fort. She released the dogs which attacked the Indians allowing time for the men to return safely. Click here to learn more about Charlotte Robertson.
Casper Mansker was an early explorer of the Cumberland Valley. Mansker came to the Cumberland River on hunting trips in 1769 and 1771. He returned to the area in 1779 and built a fort near Mansker’s Lick.  Mansker described his hunting trips to the French Lick, a salt lick that drew in “the greatest number of buffaloes and wild game that I ever beheld in my life at one place.” Click here to read part of Mansker’s journal.
Settlement didn’t begin in West Tennessee until the 1818 Jackson Purchase, negotiated by Andrew Jackson and Isaac Shelby. The treaty paid the Chickasaws $300,000, to be paid over 20 years, for 10,700 square miles of land between the Mississippi River and the Tennessee River (now West Tennessee). The city of Memphis was surveyed in 1819; there were 50 residents.