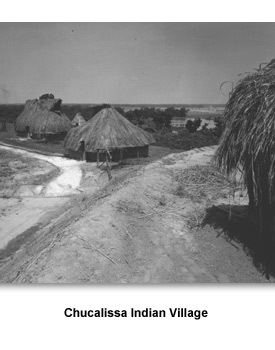 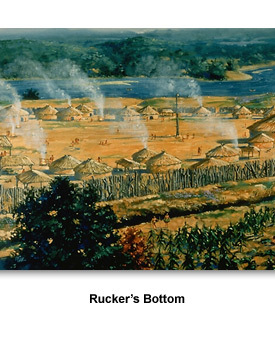 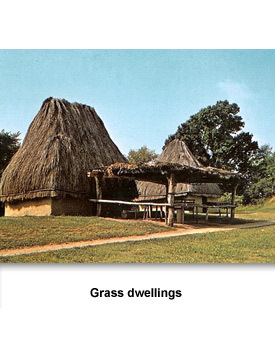 Archaeologists have found many Mississippian sites here in Tennessee. They locate these sites by looking for large mounds of earth that were once the temple mounds of the Mississippians.

These temple mounds were part of the ceremonial centers of Mississippian chiefdoms known as Temple Mound complexes. This is where the leaders would hold festivals and ceremonies for the people they ruled.

Most of the sites found in Tennessee have a typical Mississippian layout. They contain several flat-top temple mounds surrounding a large courtyard.

Upon excavation of the sites there is evidence of rectangular or square dwellings on top of the mounds. These could have been the leaders’ homes or perhaps religious temples.

There is also evidence of dwellings surrounding the mounds and central courtyard. These might have been the homes of powerful families that lived within the safety of the walls which usually surrounded the entire complex.

The majority of the Mississippian culture lived in small farming communities and hamlets, not in the Temple Mound complexes. These small farming communities have long ago disappeared and are not easily located by Archaeologists because they lack distinguishing features like the large mounds of the central complexes. The people of these smaller settlements paid tribute to the ruling elite. Tribute was paid in food, crafts, and labor.

Both Temple Mound complexes and the smaller settlements that they ruled were generally found near a river, usually on a natural terrace or bluff above the flood plain. The Mississippians used the rich soil of the flood plains to plant their crops. The annual floods deposited nutrients onto the flood plains making them ideal areas to plant crops.

Locating near rivers allowed easy access to food sources like fish and freshwater mussels. Mounds of shells, called shell middens, are found throughout the state. These midden deposits show that the Mississippians in Tennessee utilized the freshwater mussels as a food source. Shell middens are another feature that help Archaeologists find prehistoric American Indian sites.

Rivers also gave natural protection from other attacking chiefdoms.  Any attack would usually not come from the river side of the community.

The Shiloh site is located on the west bank of the Tennessee River near Savannah, Tennessee.   It is within the boundary of the Shiloh National Military Park.

About 1,000 years before it was a Civil War battlefield, Mississippian Indians constructed more than sixty earthen mounds on this site. These mounds are made up of platform mounds (small mounds usually rectangular or square in shape and not very tall) and pyramid mounds.

The site was protected on one side by the Tennessee River and on the other side by a long fortified wall made of tree trunks called a palisade. Archaeologists have dis-cover-ed evidence of trade with the large Mississippian town of Cahokia at the Shiloh Mounds site.

The Mound Bottom site was a very large city in Tennessee during the Mississippian era. Archaeologists believe it was constructed around 1,200 to 1,300 A.D.

It is located in Cheatham County on a broad horseshoe-shaped bend of the Harpeth River. The river borders the site on three sides with only a small stretch of land making up the other side.

The Mississippians built a large embankment with fortified log walls around the entire city. Inside, Mound Bottom had many pyramid temple mounds, burial mounds, home sites, craft centers, and other buildings.

Archaeologists have dis-cover-ed many artifacts at Mound Bottom such as pottery from Illinois, copper from the Great Lakes, minerals from the Appalachian Mountains, and sea shells from the Gulf Coast.

There is still speculation among archaeologists that the Mound Bottom site may have been part of a much larger complex or at least connected to the Pack site, now situated across U.S. Highway 70.


First Tennesseans >>  Learning About the Past >>  Tennessee Digs >>  Mississippian Towns