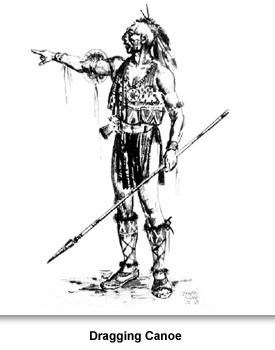 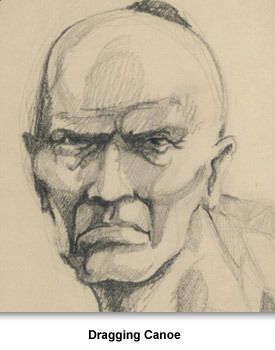 Some Cherokees like Dragging Canoe believed that Indians would have to fight to save their lands from the white settlers. Dragging Canoe was the son of a Cherokee diplomat, and is considered the greatest Cherokee military leader.
When the Cherokee decided to fight on the side of the British in the Revolutionary War, Dragging Canoe led a group of warriors in a three-part attack on settlements in the upper eastern part of Tennessee. While they had some success initially, the Cherokee were defeated when the settlers brought in reinforcements.
While some Cherokee leaders wanted to make peace with the settlers, Dragging Canoe argued against it. He correctly predicted that the white settlers would keep coming and settling Cherokee lands until the Ani Yvwiya (Cherokee’s word for their tribe which translates as the Real People) would have to leave their homes and go into the wilderness.
When he was outvoted, Dragging Canoe said he would leave with his young warriors and make a home elsewhere. And together they would fight the settlers and make it “a dark and bloody ground.”
Dragging Canoe led a group of Overhill Cherokees to Chickamauga Creek near what is now Chattanooga. This new group became known as the Chickamaugas.   Later they were joined by members of other tribes who also wanted to fight white settlements. Ostenaco, the friend of the British, also joined the Chickamaugas.
From here, Dragging Canoe and his warriors harassed white settlers and fought in the Battle of the Bluffs near Fort Nashborough (now Nashville) in 1781. They defeated American army troops who attempted to capture Chickamaugan towns in 1788.
In 1792 Dragging Canoe died suddenly after celebrating a victory all night. By 1795 many of the Chickamaugas had joined the Overhill Cherokee in suing for peace with the white Tennesseans.
For more information about Dragging Canoe:  click here