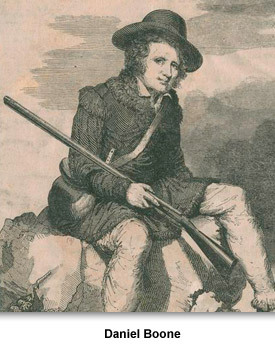 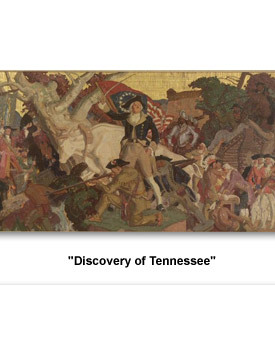 Most Indians were unable and unwilling to continue fighting after the French and Indian War ended. The Cherokee, for instance, sued for peace with the British in 1761.
The British were now firmly in control of the Indian trade, so Indians could no longer pit the English against the French. Their negotiating strength disappeared.
After 1763, life would change dramatically for native Tennessee Indians and at far greater speed.
King George III issued the Proclamation of 1763.  The proclamation prohibited European settlement west of the Appalachian mountains, which included all of Tennessee.
The English, however, were unable to enforce the proclamation. Even before it was issued,
long hunters, such as Daniel Boone, began to enter Tennessee to obtain pelts for themselves.
These hunters were experienced and skilled, so the Indians saw them as a threat to the diminishing game population. In addition to poaching trade goods, the long hunters would tell  colonists about the abundant land west of the Appalachians. Daniel Boone even led groups of settlers to the frontier.
White settlers began moving into East Tennessee in 1770 and claiming Cherokee land as their own.  Land speculators “purchased” millions of acres of land in Tennessee to sell it to new settlers. Much of these purchases were made with individuals who did not have the authority to sell the land. But it didn’t seem to matter. Settlers were still coming in to the area. Read more about one of the land purchases, the Transylvania purchase.
Indians were disturbed at these developments. Some wanted to find a way to make peace with the newcomers, while others wanted to run them out or kill them.
Resistance to white settlement continued as Chickamaugas joined the Upper Creek Indians. This group raided areas in southeast Middle Tennessee. This resistance ended with Andrew Jackson’s victories over the Red Stick Creeks in 1814.