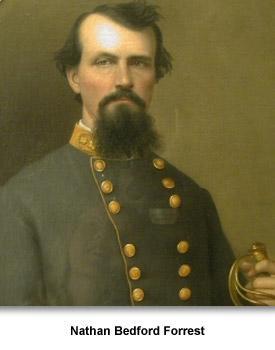 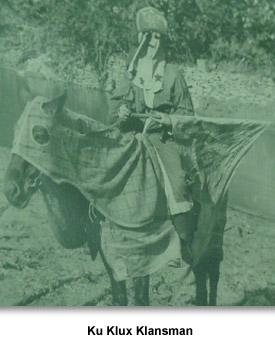 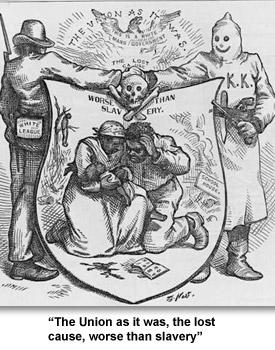 In 1865, ex-Confederate soldiers in Pulaski, Tennessee, formed the Ku Klux Klan. At first it was only a social club. Then in 1867 when freed black men got the right to vote, the group became more political and more violent as they tried to discourage African Americans from voting.
In 1868 they chose former Confederate General Nathan Bedford Forrest as their leader. They said their purpose was to defend the U.S. Constitution--an unusual position for men who had recently fought against the U.S. government.  Their second goal was to protect widows and children of dead Confederate soldiers.
Klan leaders soon lost control of local groups.  These groups would attack, beat, and even kill African Americans.  The Klan especially targeted men in the Union League, a group set up by Republicans to encourage African Americans to vote. Read Ben Mays account of being threatened by the Klan for going to Union League meetings.

But even after the election of 1868, the Klan continued its reign of terror. Read Jim Duvall’s account of the murder of Jim Warren.   One historian explained, “Even freed people who exhibited too much independence, established schools, or assumed positions of leadership were singled out for harsh treatment.”
A newspaper account reported the activities of the Klan in Giles County. According to the account, about 20 individuals, “proceeded to a plantation nearby, upon which is employed a Union man, [Frank Dickenson] against whom, it seems, they felt the greatest animosity on account, doubtless, of his outspoken boldness as a Republican.” The group then violently beat Dickenson and several African Americans in the area.
The Klan also targeted black political leaders. Some officials were beaten by the Klan. African Americans literally faced the danger of losing their lives when they tried to seek political office.
In the late 1860s, the legislature passed a law that prohibited hooded secret societies called the Act to Preserve Peace in Tennessee. Violators could receive a $500 fine or five years in prison.
Governor William Brownlow declared martial law in the counties with the most Klan violence: Gibson, Giles, Haywood, Jackson, Lawrence, Madison, Marshall, Maury, and Overton.
At this point, Forrest disbanded the Klan, saying that the group had served its purpose. For almost 50 years the Klan was non-existent, until 1915, when it made a return to the nation and Tennessee.