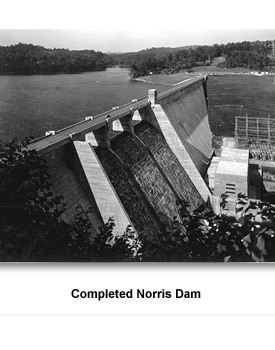 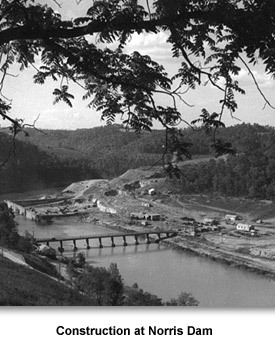 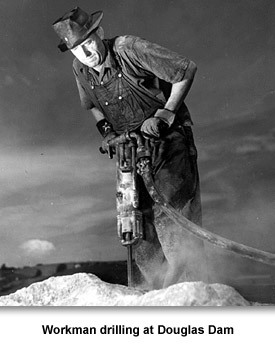 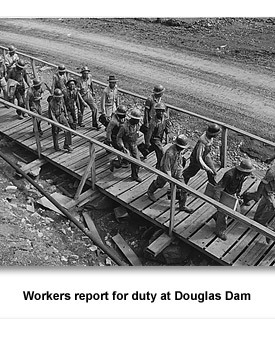 The Tennessee Valley Authority (TVA) changed the lives of many Tennesseans during the
Great Depression .

This agency continues to be very important to the economy of Tennessee and the other states along the Tennessee River Valley it serves today.

During the Great Depression, most people who lived in the Tennessee River Valley were very poor.  Jobs were few, and many of the farms had been damaged by soil erosion.

Providing electricity
Before the TVA, most Tennesseans who lived outside of cities and towns did not have electricity.  Then, private companies produced and sold electric power.  They would only run power lines places where there were many people.  They could not make a profit in rural areas with lots of farms.

President Franklin Roosevelt supported the TVA as part of his first New Deal measures approved by Congress in 1933.  This new agency was designed to help control floods, produce electric power, and help improve the lives of people living in the Tennessee Valley.

The TVA accomplished many of these goals despite problems.  There were disagreements about its purpose and how it should go about its work of providing electricity.  TVA faced lawsuits from private power companies.

TVA also gave funds to the State Agricultural Extension Service to hire people in the counties to work with farmers directly.  They would set up a test farms around the county using certain techniques or fertilizers.  One farm agent in 1940 said he had 12 farm demonstrations—one within four miles of every farm in his county.

“Now when I want to tell a man how to develop permanent pastures,” he explained.  “I hold a meeting with them, one on one.   A man can stick his fingers into what (the soil) I’m telling him about.”  The agent also said the farmer can look at a test field right beside one farmed in other methods and see the difference in crop production.

Creating new dams and lakes involved buying a lot of land and helping the people who lived there find new homes.  More than 72,000 had to move so that the TVA could complete their building projects, and many of these families were not happy about having to sell their land.

Producing benefits
TVA produced many benefits.  It employed thousands of people to work on building dams and other projects.  It provided many areas with inexpensive power.

Because the TVA distributed power through local government utility companies and rural electric cooperatives, more people had power lines going up in their communities.  For the first time, many Tennesseans had the opportunity to use electricity in their homes and farms.

Lakes which were formed behind TVA dams still provide thousands of people with recreation.  People today still go swimming, fishing, and boating on the lakes.

Learn More:  To learn more about the history of the TVA, see http://www.tva.gov/abouttva/history.htm