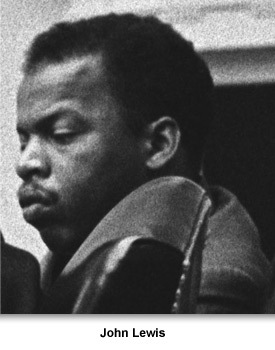 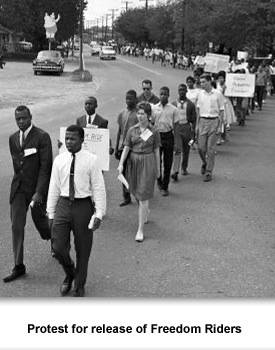 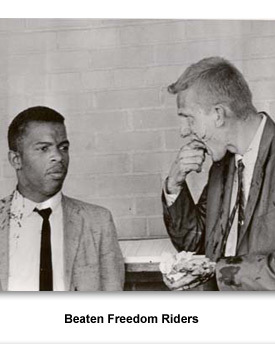 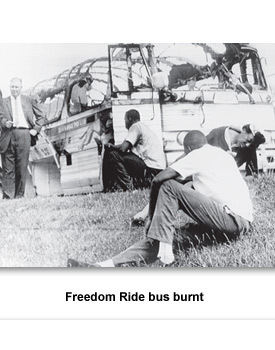 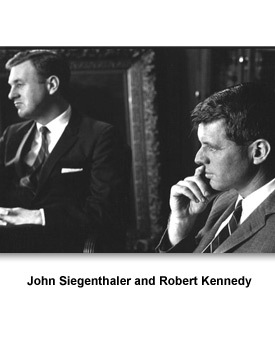 The Freedom Rides were the first step after the success of the sit-ins.

The Supreme Court had ruled that interstate travel could not be segregated, but the order was not being carried out in some southern states which still had segregated waiting rooms.
On May 14, 1961, the Congress of Racial Equality (CORE) organized Freedom Rides to try and force southern states to honor the decision.

Activists, called Freedom Riders, would get on an interstate bus in the north and then ride through the southern states of North Carolina, Georgia, Alabama, and Mississippi. They would get off at the different bus stations and go into the whites only waiting rooms and restrooms.
If local officials arrested them, it would be so much better. Then the media would run the story in newspapers across the country.
Two buses left Washington D.C., and all went peacefully until Rock Hill, South Carolina, where several riders, including John Lewis, a Nashville sit-in veteran, were beaten. Later one of the buses was firebombed in Anniston, Alabama, with the Freedom Riders barely escaping the flames.
The Freedom Rides seemed over. But Nashville's Student Non-Violent Coordinating Committee (SNCC) decided to continue the rides.  Diane Nash was the coordinator, and several Nashville veterans of the sit-ins were sent on bus rides.
Willing to die for what they believed
Attorney General Robert Kennedy sent a Justice Department representative, Tennessean John Seigenthaler, to observe the Freedom Rides. Seigenthaler told Diane Nash that she needed to temporarily suspend the rides.
She refused. Then, Seigenthaler said, “You’re going to get your people killed.” Nash replied, “Then others will follow them.”
“Bernard, are you prepared to die?" asked one of the students. Bernard Lafayette, a Nashville student, said he was. If he died, Lafayette said, at least he died for the cause. He and the 19 others made out their wills before they left Nashville.
The Freedom Riders rode from Birmingham to Montgomery, Alabama, on May 20, 1961. As they left the bus, a mob of white people, some carrying baseball bats, suddenly showed up.  They started beating riders and newsmen alike.

Jim Zwerg, a white college student from Nashville, knelt down and began to pray, but he was knocked down. One man held him up while others hit him in the face and kicked him in the stomach.  Lewis was also getting hit and losing consciousness.
Seigenthaler arrived after the mob attacked. He tried to help a couple of women escape, but was pulled out of his car and beaten. His ribs were fractured and he had a concussion.

Both Zwerg and Lewis were saved by the appearance of Floyd Mann, the Alabama State Commissioner of Safety. Mann, who suspected there would be trouble, had brought his state troopers into Montgomery.

When Mann arrived at the bus station, he fired his gun in the air, scattering the mob. Mann then put his gun to a head of man beating a cameraman, and told him, “You swing that bat one more time, and you’re dead.”
Afterwards Robert Kennedy talked with Seigenthaler about the riders. “They’re really fearless, aren’t they?” Kennedy said that he admired them because, “they’re really willing to die” for what they believe in.
The riders did not give up. James Lawson climbed aboard one of the new buses with the remaining members of the Nashville group. Upon entering Mississippi, the second wave of riders was arrested and placed in prison. Refusing bail, they were later released and returned home with a new sense of accomplishment.
In September, the Interstate Commerce Commission officially banned segregation on interstate transportation.  The success of the Freedom Rides led to more white violence which was met with increased activism.
For more information about the Freedom Rides, click here and here.