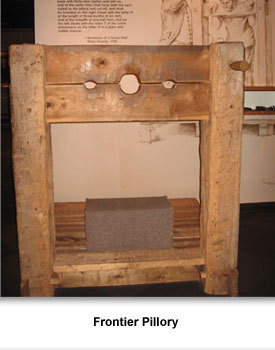 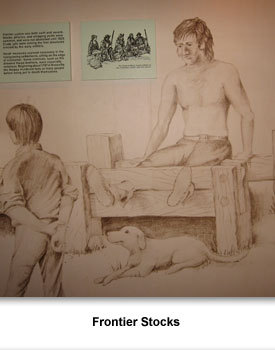 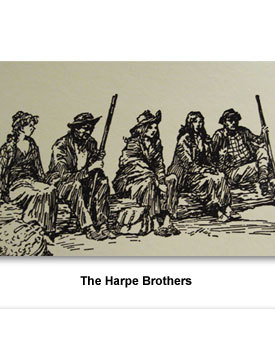 Life on the frontier in Tennessee was difficult and demanding. Many families were poor and had to carefully marshal their resources of food and livestock.
But just like today, there were people on the frontier who would steal, cheat, or kill in order to get what they wanted. Without an organized criminal justice system, frontiersmen often worked together to punish wrong doers.
For instance in 1798, two brothers known as Micajah “Big” Harpe and Wiley “Little” Harpe were attacking and killing travelers on trails outside of Knoxville and Crab Orchard. After the fourth death was dis-cover-ed, Captain Joseph Ballenger, described as a war veteran, called local men together and went after the Harpes who had moved into Kentucky. Both brothers were jailed.
While awaiting trial, they managed to escape by knocking a hole in the wall. Big Harpe was later shot and killed by a posse. Little Harpe lived until 1804 when he was arrested in Mississippi and hung for his crimes.
Since there were not many jails in which to place the criminals, punishments often were physical, and could be harsh. It could include whippings, brandings, or being placed in stocks.
In 1795 a horse thief in Knox County was forced to stand in the stocks for one hour. During that time, he was whipped 39 times, had his ears nailed to the pillory and then cut off, and was branded with the letter “H” on one cheek and the letter “T” on the other. In this way, he would always be known as a horse thief.
In the early years of the frontier, Tennessee was part of North Carolina, so that state’s assembly appointed justices of the peace to govern the territory. These men had great power. In addition to judging illegal behavior, these justices could punish bad behavior. This might include fathering children on unwed mothers, cheating your neighbor, and being an idle vagabond or eavesdropper. The justices could also perform marriages.
As the state became more settled, magistrates and local law enforcement officers were hired.   There was not a state penitentiary until 1829 when one was built outside of Nashville. Until then each county had to house prisoners, usually in the county jail.