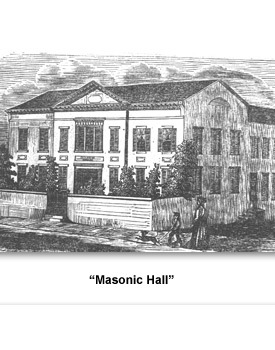 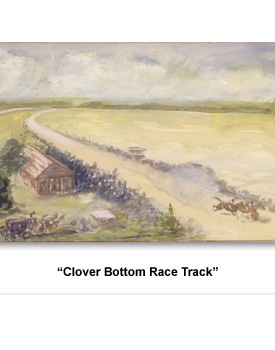 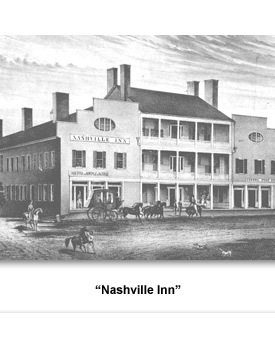 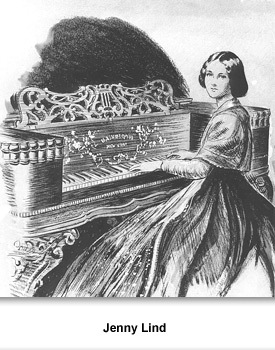 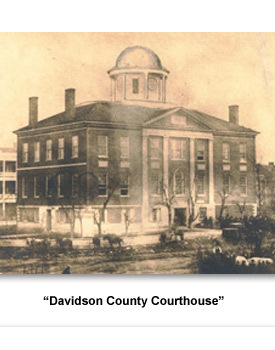 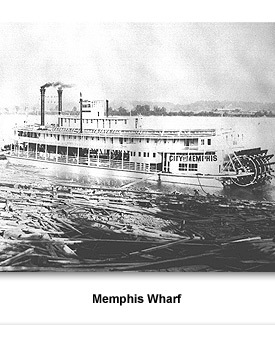 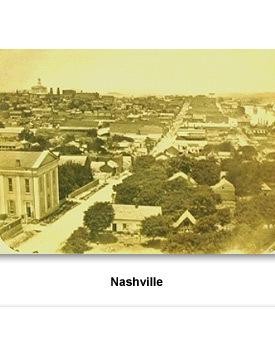 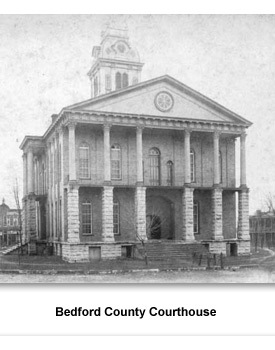 Living in Town
Many towns in Tennessee grew and flourished during the early to mid-1800s. During this time, the state had only two communities large enough to truly be considered cities: Memphis and Nashville.
Cities—Nashville
Cities offered its residents access to goods and entertainment not available in rural areas.  A new theater, the Adelphi, was opened in Nashville in 1850. Jenny Lind, the best-known singer of the time, performed there courtesy of showman P.T. Barnum.  Other productions included opera and performances of Hamlet and Romeo and Juliet.
Lectures were very popular during this time. Men, and only occasionally a woman, and then speaking only to women, would stand and talk about particular topics. In a time when most people didn’t have access to a free public library, lectures were a way for people to learn more.
The Masonic Hall was constructed in Nashville on Church Street in 1818. Many balls, concerts, and dramatic readings were held there. One person wrote that concert goers entered a large room that was lit by candles. They sat on rows of benches in front of a platform.
Horse racing was still popular. Nashville had four tracks, one on each side of town. The self-billed horse “race of the century” took place in 1843 at the Nashville Race Track. It was the richest race to that time, and was won by a horse named Peytona.
Cities—Memphis
Steamboat traffic on the Mississippi River turned Memphis from a flatboat landing into a city. Its wharfs were crowded with cotton, imports, crews, and businessmen. In 1852, the city began installing sidewalks with street lights. By 1846, the Independent Fire Company was established. It was the beginning of the Memphis Fire Department.
The first permanent theater in Memphis was opened in 1850. Jenny Lind also came to Memphis. She performed at the Odd Fellow Hall in the early 1850s.
The Gayoso House was built in Memphis in 1842 and later expanded. A hotel, the Gayoso had indoor plumbing when most Memphians still had outhouses and heated water for washtubs. The hotel had hot showers, marble tubs, and flush toilets—an unheard of luxury for Tennessee.
Urban problems
Cities did have problems. Public health was poor. The streets were full of mud and garbage with an occasional pig rooting in the garbage.
Although outhouses (outside bathrooms) were built, many people didn’t have one. A wagon would come by and collect human waste for a fee. Other residents threw their refuse into the street.

Dig Deeper: How did people go to the bathroom in the past?
Men were fond of chewing tobacco, which required them to periodically spit out the juices. They not only spit on the streets, but also on the floors in businesses and other public places. Women fussed about getting tobacco spit on their long skirts.
Coal was cheap and was used to heat homes and businesses and in industry. Smoke from all the coal fires hung in the air in Nashville. The city later built a plant to produce gas, and soon gas street lights and gas store lights were in use.
Towns
There were many small towns in the state. Each county had a town designated as the county seat. These communities usually featured a county courthouse, a variety of shops and businesses, and somewhere between 1,000 and 3,000 free and enslaved residents.
At first, many town stores, homes, and even courthouses were rough buildings built from logs. A sign might be the only indication of whether a log cabin was a tavern or a dry goods store selling household goods.
Town residents gradually improved their buildings by constructing brick courthouses and wooden frame and brick houses and stores. As time passed, some areas of towns became primarily residential areas, while others became shopping or business districts.
In the 1850s, the railroad began connecting Tennessee towns, making it easier to travel. This also inspired a wave of prosperity . Communities built larger and fancier public buildings. The concept of building blocks of stores with plate glass front windows became popular.
New private academies, especially those for women, were constructed as townspeople had more money to send their children to school.
Commercial districts with warehouses and a variety of small industries like cedar bucket factories and textile mills developed near new train depot stations. Urban women were encouraged to plant attractive flower gardens and beautify their front yards.

Read more about town life in Tennessee during this time.