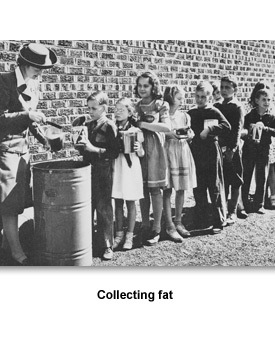 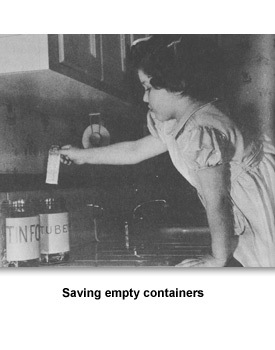 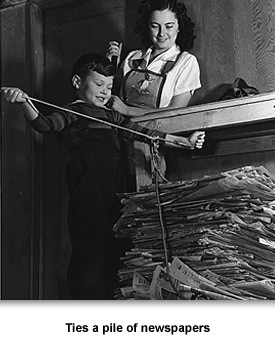 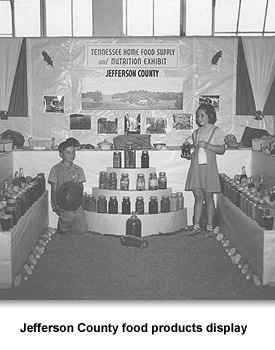 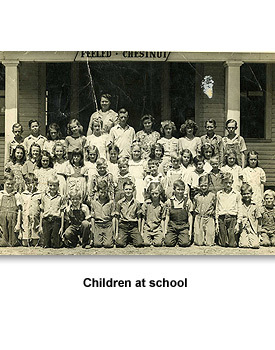 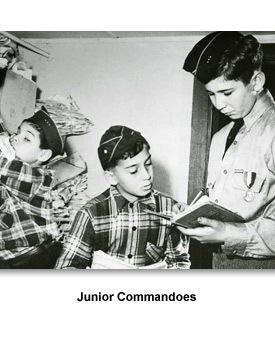 Children and the war

Children living in Tennessee during World War II had their own perspectives on world events.
Like other American children, their school day often began with the Pledge of Allegiance and a prayer for those in the military.

They had patriotic school plays, sang patriotic songs, had flag raisings, made war-related posters, and had parades. After school, they played war games, made model airplanes, or read about the war effort.
Children also actively participated in the home front war effort. Many joined the Junior Service Corps or the Junior Commandos. They bought 10 and 25 cent stamps for their war bond booklets that, when full, could be exchanged for a $25 war bond.
Children also joined in scrap drives, collecting cans, tin foil, paper, and metal. They went door to door in their neighborhoods collecting items.
For example, during 1942, Boy Scouts in Nashville led a scrap paper drive for the war effort. They gathered more than 50 tons of paper from local residents. A metal scrap drive organized through the Nashville public schools sent children out to ask their parents and neighbors for old keys. The students amassed more than 3,000 metal keys.
Collecting aluminum foil was one of children’s favorite activities, according to one woman who was a child then. The foil mainly came from gum wrappers and the lining of cigarette packs. Kids would start making a ball from the foil. The goal was to have the biggest ball of foil.
One of the favorite pastimes of children during World War II was reading comic books. It was estimated that 80 percent of all children then between the ages of 6 and 17 years read comic books. During the war, many comic heroes joined the war effort. However, “Superman” creators had him sit out the war since they felt he would make the war effort look too easy— diminishing the hardships of real soldiers.
Children also enjoyed going to the movies. The cartoons shown before the movie often related to the war effort. In one Warner Brothers’ Bugs Bunny cartoon, a female welder says if she can’t find someone to watch her baby, she won’t be able to help beat the Germans and the Japanese. Fortunately, cartoon character Porky Pig steps up and volunteers to watch the baby, allowing the woman to go back to work.
Absent fathers
Some children also had to deal with the absence of a father who had gone into the military. They were old enough to understand that their father might be in danger.
One boy wrote his father after the D-Day invasion, “I hope you don’t get killed in the invasion…I hope Germans are killed in that invasion. I hope you’re not shot because I’ll feel very bad.” Another wrote, “If I had wings like a angel I would take some bombs and fly over to Germany and Japan and bomb them. Then you could come home sooner. I want you most of all.”
Other Tennesseans who were children during World War II remember what life was like:
Edna Threlkeld Scales
Graduation from Knoxville High School was a serious business because the young men were being drafted or else they must volunteer. Some had already entered the service before graduation or been drafted at age eighteen. We didn’t have a yearbook, I suppose because of the paper shortage.
Ralph L. White
We would obtain a war zone map from the local Gulf or Esso service station and follow troop movements as the announcer would identify the foreign cities where the actions occurred last night. Although my brother’s letters were often censored by cut-outs of certain references or blotted-out lines, we could usually determine the geographical location he would sneak in his letters, and, of course, we followed with special interest any news item that referred to his military unit.
John Majors
They had a German prisoner camp at Camp Forrest, and they worked the roads and highways in Moore County. We saw many German prisoners….We were afraid because they were Germans, like [we feared] the Japanese. I remember us little guys putting up posters and cutting out pictures of Hirohito, Tojo. We all hated Tojo, and Hitler and Mussolini. We would shoot BB guns at them—the pictures were up on my grandmother’s barn at the end of the garden….”