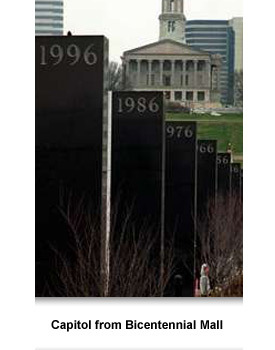 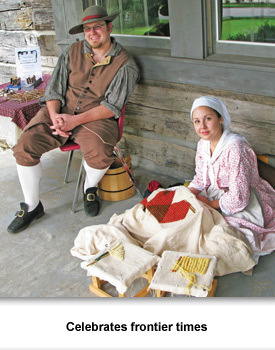 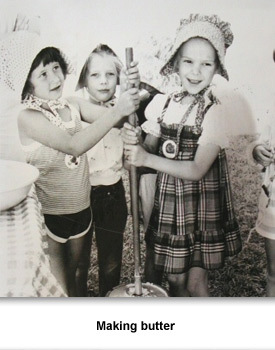 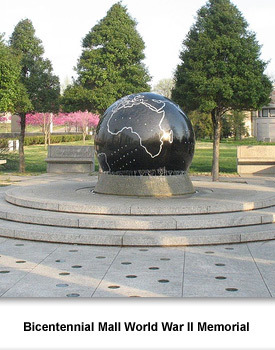 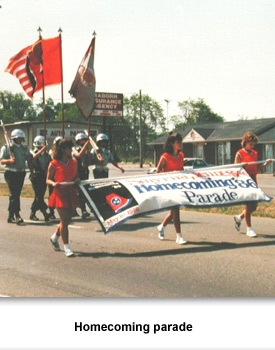 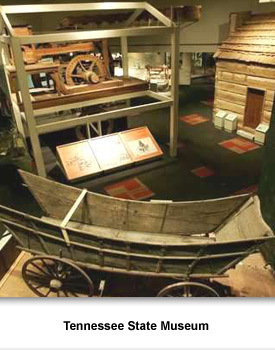 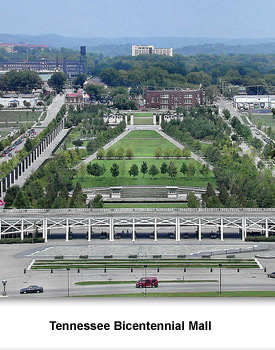 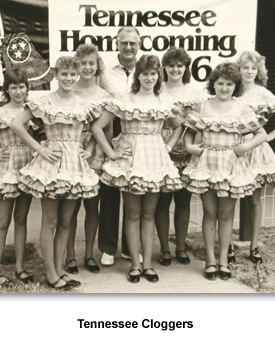 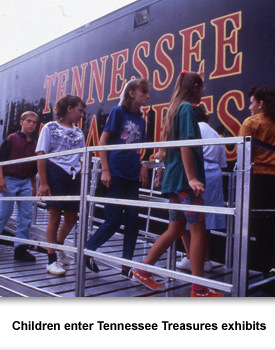 From 1975 to 2000, Tennesseans honored their state history with important public celebrations.
During the 1980s, Governor Lamar Alexander launched the Homecoming ’86 project. This state-wide event featured community history projects, festivals, parades, and other events in over eight hundred communities throughout the state.
Many Tennesseans learned more about their state and local history. At the same time, it was a way for families and children to have fun.
Tennessee became a state on June 1, 1796. The 200th birthday, or bicentennial, of Tennessee becoming a state occurred in 1996. To celebrate this important anniversary, the Tennessee State Museum and other museums offered special exhibits.  The State Museum sponsored a traveling museum, Tennessee Treasures, which traveled in three trucks to every county beginning in 1993.
In 1996, a Bicentennial commission, set up by the legislature, sent another exhibit around the state on a train. Other arts and cultural organizations like symphonies presented special programs. The state also sponsored a special volunteer day for community service projects.
One of the most enduring legacies of this celebration is the Bicentennial Capitol Mall State Park located near the Tennessee State Capitol in Nashville. This park features a history wall recognizing many important events in the state’s past.
To learn more about the Bicentennial Capitol Mall State Park, click here.


In 1998, the Tennessee Historical Society published The Tennessee Encyclopedia of History and culture ,  a comprehensive essays about important events and people in the state's history.  This was later added to internet at http://tennesseeencyclopedia.net/.

The state boasts many city, county, and regional museums about the state’s history. The largest is the Tennessee State Museum in Nashville. This museum, with more than 70,000 sq. ft. of exhibits, -cover-s the history and culture of Tennessee. Interpretive exhibits begin 15,000 years ago with prehistoric people and continue through the early 1900s with special sections on Native American Indians, pioneers, the Antebellum age, and the Civil War.
Some of the other Tennessee museums about history include:
The Chattanooga History Center
Clarksville Custom House Museum
Country Music Hall of Fame (Nashville)
East Tennessee Historical Society Museum (Knoxville)
Frank McClung Museum (Knoxville)
McMinn County Living Heritage Museum (Athens)
Memphis Rock ‘n’ Soul Museum
Museum Center at 5ive Points (Cleveland)
National Civil Rights Museum  (Memphis)
Pink Palace Museum (Memphis)
Sequoyah Birthplace Museum
Tipton County Museum (Covington)
Tennessee Agricultural Museum (Nashville)
There are also many historic homes and buildings which are opened to the public. The largest is The Hermitage, the home of Andrew Jackson. It has been opened as a museum since 1889, and it is estimated that more than 15 million people have tour the house and grounds.
The Tennessee Historical Commission has a listing of all historic properties owned by the state. Click here to see the page.
Other historic homes open to the public include:
Belle Meade Plantation (Nashville)
Blount Mansion (Knoxville)
Fort Loudoun (Vonore)
James K. Polk Home (Columbia)
Sam Davis Home (Smyrna)