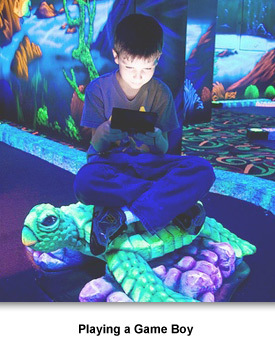 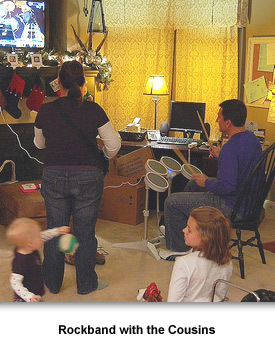 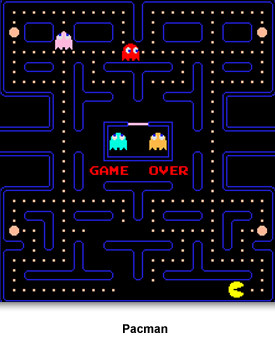 The first video games were developed by electrical engineers in the 1940s and 1950s who were trying to figure out things to do with the new computer technology.  For example, a MIT student designed the first video game called “Spacewar.”

Another engineer came up with a computerized table tennis-like game. These early games would not even be recognized as a video game today. The table tennis game was on a black screen with a line across the middle and movable lines on each end that could only go up and down. The ball was represented by a white dot.
Developers started making video games for arcade machines. The release of the game Pong in 1972 by Atari was the beginning of the video game era. A home Pong game console was later sold through the Sears Roebuck catalog.
Pong
With the success of the home version of Pong in 1975, new companies were formed to develop and sell what were called “home television games.” This included a company in Nashville called First Dimension, which sold game consoles before going bankrupt a couple of years later.
Even with home television games, people were still going to arcades, pizza parlors and bars to play the most popular video games. Many were developed by Japanese companies. These included Space Invaders in 1978, Pac-Man in 1980, and Donkey Kong in 1981. That same year Atari produced one of their most popular arcade games, Centipede.
Super Mario Brothers
Then, in mid-1982, the video arcade industry stalled. People were still playing games, but the numbers were going down. That changed in 1985 when Nintendo introduced their Nintendo Entertainment System (NES) for home use. This system had an easy-to-use control pad and interchangeable cartridges. Its Super Mario Brothers game had bright, cartoon-like graphics with fast action and humor. It was also affordable for the average family.
Sega came out with a similar console featuring Sonic: The Hedgehog, and later Sony Playstation was released. This started an intense industry war for video game dollars between these units with Microsoft’s X-box later joining the competition. Each new release offered better graphics, more involved role playing, and faster computer chips.
Violence in games
The release of the game Mortal Kombat in 1990 caused a nationwide debate on violence in video games. The game featured graphic fatalities including the ability to wrench an opponent’s heart out or to pull their head off.
The U.S. Senate held hearings in 1993 about the violence. In response, the video game industry created a video game rating system. These ratings are shown on the game boxes to allow parents to know the level of violence or graphic content in the games before they purchase them.
Other games were reality-based. Madden NFL was named after former football coach and television commentator John Madden. Players could and did spend hours developing football teams and then playing them. One young man at the University of Tennessee in 2004 said that he thought Madden NFL caused more freshmen guys to flunk out of school than any other factor.
Computer games
Computer games also were popular with teenagers, including the Sims game. This game allows players to direct the lives of their characters, making decisions on where to work, where to live, how to decorate their house, and even where to go to shop or have fun.
Video games were still part of the nation’s entertainment into the 2000s. While gamers still had consoles, many were also playing games online.
The most popular of these online games was World of Warcraft, which is described as a MMORPG—a Massive Multiplayer Online Role-Playing Game, produced by Blizzard Entertainment. In this game, for a fee, participants can go online and play in a gaming world, inhabited by video-made creatures, with other participants worldwide. Players can interact with other players.  According to a Blizzard news release in 2008, the monthly subscribers for Warcraft totaled 11.5 million people worldwide.