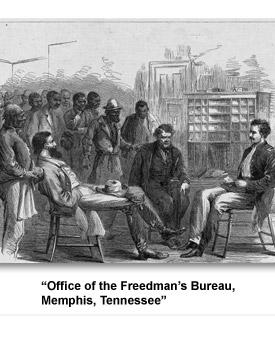 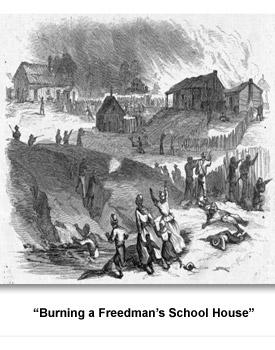 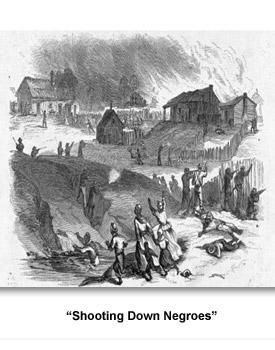 In the spring of 1866, animosity between whites and African Americans in Memphis erupted into one of the worst incidents of racial violence in the history of this country.
During and after the Civil War, many former slaves from the countryside migrated to Memphis. The city also had contraband camps, a Freedman’s Bureau office, and Fort Pickering, a Union military base with African American soldiers.
Many white residents were alarmed by these changes. In the months preceding and even following the massacre, pages of several major Memphis newspapers seethed with violent racial prejudice.
The massacre seems to have been ignited by a traffic accident between an African American and a white carriage driver. A group of African American soldiers stopped police from arresting the African American. By this time, a group of white spectators had collected. This relatively minor situation escalated into three days of vicious rioting by whites.
Whites attacked South Memphis African American families and assaulted the family members of African Americans at Fort Pickering. The fort commander did not allow the Union soldiers to fight against the rioters.
White rioters burned African Americans’ houses, churches, and schools. Forty-six African Americans and two whites died in the violence; an unknown number of African American women were raped. Significantly, the attackers included public officials such as police and firemen.
The U.S. House of Representatives investigated the riot. They questioned a variety of witnesses, including Memphis newspaper editors who published provocative stories in their paper designed to increase racial tension.
Following the violence, one paper ran an article that threateningly called on African Americans to “seriously ponder the consequences of their alleged drive for equal social status in light of recent events.”
No one was ever tried or convicted for the murders and other acts of violence that occurred in the riot.