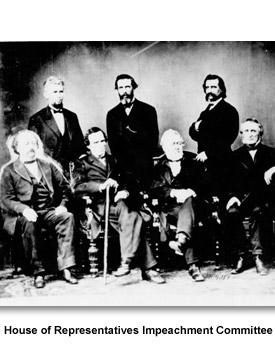 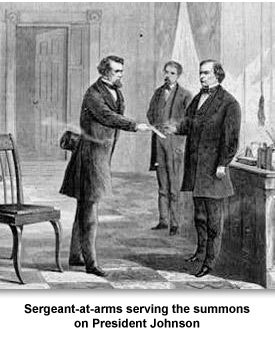 Relations between Congress and Johnson became very bad.  Congress passed the Tenure of Office Act which limited the president’s ability to fire members of his cabinet.  Johnson thought the bill, which was passed over his veto, was unconstitutional.

When Johnson became unhappy with Secretary of War Edwin Stanton, he fired him without asking for Senate approval.  Many Congressmen thought this violated the Tenure of Office Act.

Congress impeached Johnson which means they charged him with crimes.  In the spring of 1868, Johnson was put on trial for breaking the law.  If he was convicted, Johnson would be forced out of the presidency.

Johnson’s attorneys, fearing his belligerent attitude would not win him votes, would not let him testify in his own defense and told him not to talk to reporters.  They would not even let him attend his trial in the Senate chambers.  Johnson narrowly escaped being convicted by only one vote.

His bodyguard who had watched the voting, ran from the U.S. Capitol to the White House and burst in a meeting. “‘Mr. President,’ I shouted,…‘You are acquitted.’…The President responded…calmly enough for the moment, and then I saw that tears were rolling down his face.”  For a complete description of this account, go here.

Although Johnson remained president, Congress, with its ability to override Johnson’s vetoes, was in control for the remaining year of his presidency.

Dig Deeper:  Johnson losing political power was one result of his impeachment.  What other repercussions or results did this event have?