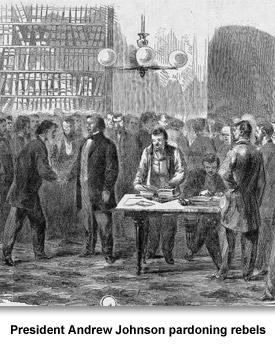 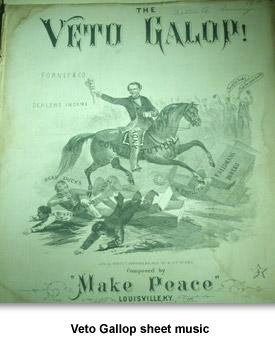 Andrew Johnson unexpectedly became president after Abraham Lincoln’s death.  This was a very uncertain time.  The Civil War had just ended.  No one knew exactly how to put the country back together.  Many people had different views on what to do about the southern states that had fought for the Confederacy.

During 1865 and 1866 President Johnson had a lot of influence over Reconstruction.  After 1867 Congress seized control of this process.

In 1865 most of the senators and representatives in the United States Congress were Republicans.  At first many liked Johnson.  They thought he would support their two major goals.  These were to help freed slaves in the South, and to punish former Confederates.

Johnson wanted to make it easy for southern states to rejoin the Union.  He supported amnesty (forgiveness) for most southerners.  Very few Confederates were ever tried for treason against the United States or went to jail. They would just have to sign a loyalty oath to the United States.

In contrast, Johnson thought rich white southerners and those who were important Confederate officials should have to work harder to receive forgiveness.  He wanted to require them to apply for individual presidential pardons.  A lot of these special pardons were approved.  While he was president, Johnson did not really do much to punish Confederates.

Johnson thought that whites should stay in control of state and local governments in the South.  Although Johnson stated that he believed that African Americans who served in the Union Army during the war or who owned property should be able to vote, he did not think the U.S. government should get involved.

Johnson believed each state government should get to choose which of its citizens could vote.  In response southern states passed laws that limited the freedom of African Americans to own property, travel, and to vote.

Many Republicans in Congress were angry at Johnson’s policies.  They wanted to protect the rights of freed slaves.  They also were angry that former Confederates had easily returned to power in several states.  They saw that these leaders were determined to deny African Americans the right to live and work as free people.

In response many Republicans in Congress decided to pass their own Reconstruction policies.  Johnson vetoed many of these laws.  He vetoed the Freedmen’s Bureau Act and the Civil Rights Act of 1866.

This convinced many in Congress that they no longer wanted to work with the president.  If President Johnson tried to veto a bill they passed, the Republicans in Congress usually had enough votes to overturn his veto.  Dig Deeper:  What does it mean to overturn a veto?

Dig Deeper:  Johnson losing political power was one result of his impeachment.  What other repercussions or results did this event have?