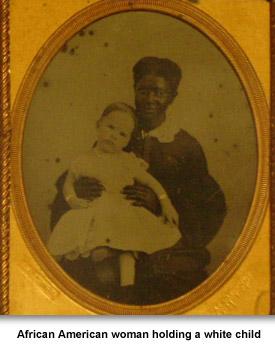 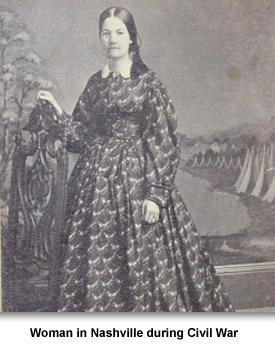 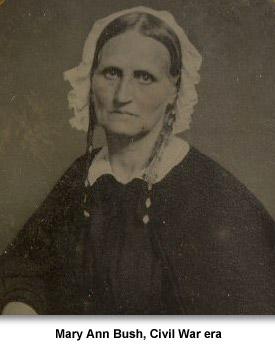 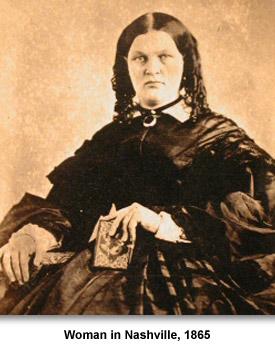 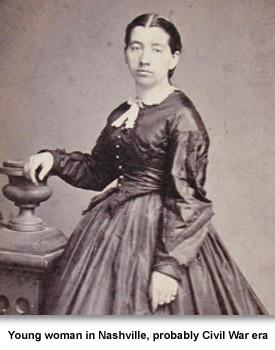 Many women in Tennessee, although they could not join the army, did their part for the cause, whether it was Union or Confederate.

Sarah Thompson was married to a Union soldier who was transporting dispatches when he was captured and shot by Confederate General John Hunt Morgan’s soldiers.

She “devoted all my strength and energy to aid the cause.” Sarah became an unofficial spy for the Union army, noting Confederate movements and numbers and reporting them to Union contacts.

Before the Civil War, many white women in the South generally did not work outside of the home.  However, the Civil War reshaped women’s roles in the workforce.

Some working class women, accustomed to domestic duties, were forced to work in the family’s fields in order to maintain the farm.  Other middle and upper-class women entered into the paid workforce for the first time as nurses, treasury clerks, or teachers.

Louisa Brown Pearl had come to Nashville with her husband who was the first superintendent of public schools. When the war began, they sent their two daughters north and he followed. Louisa decided to stay in Nashville when her son joined the Confederate army. She was forced to take in boarders to get by. She wrote in her diary:

"Just read a letter from John--says he has slept the last four nights on the ground in the snow with nothing but his blanket over him & slept quite warm & comfortable..Have since heard on the street that the 1st Regt. Have been ordered to Stanton [Virginia]...Probably they will go to Bowling Green where a battle is expected soon. I feel terribly disappointeed I hurried home, locked my door & had a great cry, but after awhile got calmer so I could take my place at the table..."

More than 3,000 women contributed to the war effort, serving as nurses without formal training for the Union or Confederate armies.  They were paid around twelve dollars a month, and duties included changing bandages, cleaning wounds, giving medications, and giving general encouragement to the troops.

In Memphis, a group of women opened the Southern Mothers Hospital to help care for the wounded, even though it sometimes was difficult.  One Memphis woman said:

“The thought of a man having his leg or arm sawed from his body while living, was horrifying to our hearts, yet we had to get used to it as well as all other distressing scenes attending a state of war.”

Those women who did not work outside of the home were employed in a variety of domestic duties.  Working-class women made their own goods such as butter and clothes, cared for the children, did a variety of daily household chores, and worked in family gardens or farms.

During the war, wealthy white women often had to supervise large plantations, make clothes, and work with slaves.  Before the war slave women worked long and hard in a variety of household or field tasks. However, the Civil War disrupted slavery in Tennessee.  Many slave women seized the opportunity to flee to the Union Army, or demand rights from their owners.

Ordinary women throughout the South joined volunteer associates in support of issues such as orphanages, temperance, care for the elderly, relief for the poor, and in support of the Confederacy.  In 1861, the women of Memphis formed the Military Sewing Society, which made uniforms for soldiers.  Other women made flags and banners for the troops.

Aside from donating apparel and assisting in local hospitals, the Ladies Tennessee Hospital and Clothing Association also volunteered to send several women to Virginia to serve as nurses. During the occupation, such societies aided the Confederacy more secretly.  The Southern Ladies Aid Society, whose members Union officers suspected of smuggling medicine, food, or other supplies, was one of these organizations.

Read about Elizabeth Avery Meriwether's experience trying to get milk for her children and then getting run out of Memphis by Union Gen William Sherman.