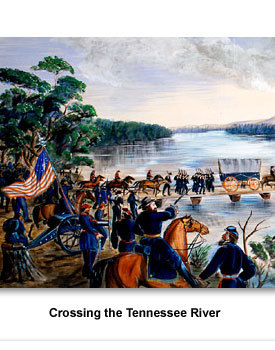 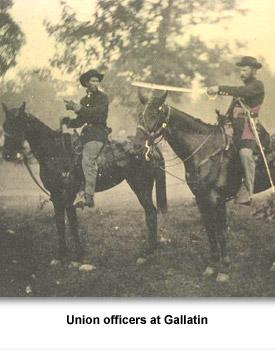 Many men joined the army so they could fight in the war.  Some wanted to prove their bravery while others wanted to experience war.  Whatever their reasons, warfare often turned out to be different than what they expected.

When the commander knew that the enemy was advancing in force, there was a certain pattern to camp life.  Extra supplies were issued and cooks told to prepare three to five days rations.

While getting ready for battle, soldiers might worry about dying.   They not only feared death, but also dreaded dying as an unknown on a battlefield far from home.  So some soldiers would wear a means of identification such as a piece of paper with their name and hometown written on it pinned to the inside of their jacket or placed in their shoe.

Dig Deeper:  How did the Civil War commanders find out where the enemy troops were located?

The commanding officer usually addressed the troops, encouraging them on to battle and glory.  Before Shiloh, Confederate General Albert Sidney Johnston (who would die at Shiloh) told his men:

I have put you in motion to offer battle to the invaders of your country…Remember the precious stake involved; remember the dependence of your mothers, your wives, your sisters, and your children on the result;…With such incentives to brave deeds and with the trust that God is with us, your general will lead you confidently to the combat, assured of success.


Ammunition was then distributed to all the troops.  This was usually 40 to 60 rounds per man. A round is a lead ball or bullet and enough powder for a single shot.  The bullet and powder were wrapped in a piece of paper with the bullet at one end and the powder at the other.  The paper was twisted at one end to hold the powder and ball in.  This was called a cartridge.

To load the gun, the soldier would take a cartridge, bite off the twisted end, and ram the bullet and powder in as far down the barrel as possible.  After every shot, the soldier then followed the same procedure to reload his weapon.  Extra rounds were kept in a container on his waist, his haversack or even in his pockets.

Watch a demonstration of how a Civil War era Enfield rifle was loaded.

On the day of the expected battle, soldiers were woken early, before dawn, to dress and stand for inspection.  Officers would usually remind the men to stay calm, listen for orders, aim low, and target officers.

Dig Deeepr:  Why were these instructions given and what did they mean?