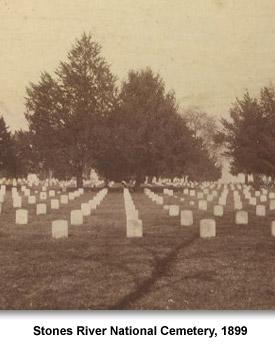 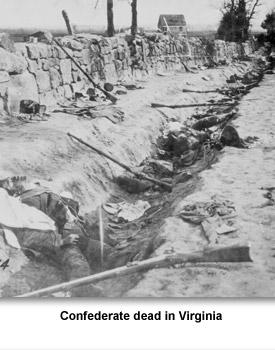 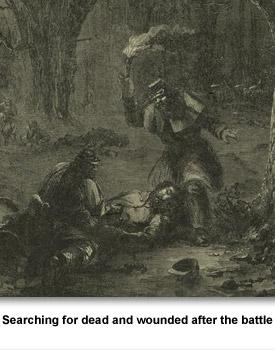 If a soldier promised to look out for a friend, he might try to find him, making the rounds of the battlefield and hospitals.

Often friends and comrades were reunited alive as the fighting tended to separate units. Sometimes the only news would be from someone who saw him die during battle.

Today soldiers have dogtags which have their names and information on them. Back during the Civil War, soldiers often would slip pieces of paper with their names into their shoes or pockets so if they were killed someone would know who they were.

Notifying next of kin was difficult during the Civil War. The dead soldier's chaplain or commanding officer might try and contact his kin.  Often the only information they would have is the soldier's name and hometown.  They would have to write a letter addressed to "the family" of a soldier and hoped it was delivered.

Most of the time, it was the victors and the local townspeople who buried the dead.  Even in death, the soldiers were often buried separately from the other army’s dead.  Sometimes due to the large number of dead, they were buried in mass graves.  At Shiloh, the dead were buried in trenches, seven deep in some places.
Burying the dead could be a particularly horrific job, especially if the battle occurred in the heat of summer.  A soldier who buried the Battle of Gettysburg dead wrote:

“The sights and smells that assailed us were simply indescribable—corpses swollen to twice their original size, some of them actually burst asunder with the pressure of foul gases and vapors…The odors were nauseating and so deadly that in a short time we all sickened…most of us vomiting profusely.”

After the war, an effort was made to find bodies of men who had been buried where they died and rebury them in national cemeteries.  But only the bodies of the Union troops were buried there.  Confederates were buried by local or state people in Confederate cemeteries.

Dig Deeper:  Why weren’t the Confederates buried in the National Battlefields?

Mental trauma
The discomforts of war were not limited to physical injury or death. There were also mental problems. The Civil War, as in all wars, forced soldiers to change in order to deal with the brutality. They had to kill people they didn’t know or be killed themselves. They had to put themselves in danger to follow orders.

Some men had nightmares. J.B. Mitchell wrote his father in 1863 that he dreamed that all his sleeping comrades were really corpses. Another soldier wrote his wife that “my mind is always tore up…I [think I hear] some groaning…some cursing, some screaming, until it distracts my mind.”

Others learned to turn off their emotions and ignore the dead around them, even to “cook and eat, talk and laugh with the enemys dead lying about us.” Whatever the response, the war changed the men who fought in it forever.