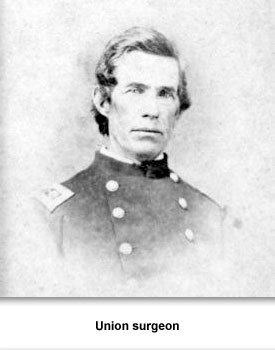 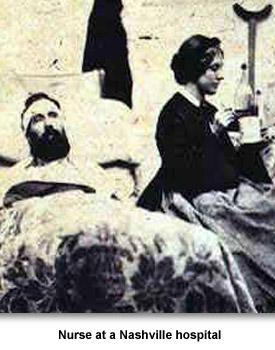 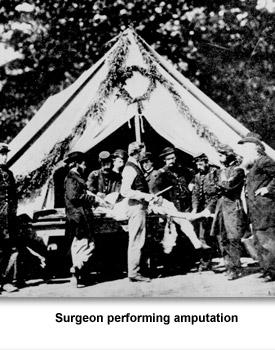 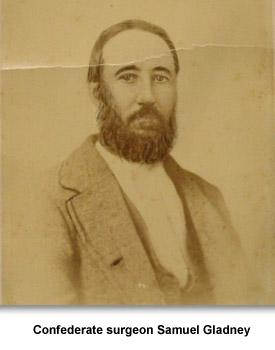 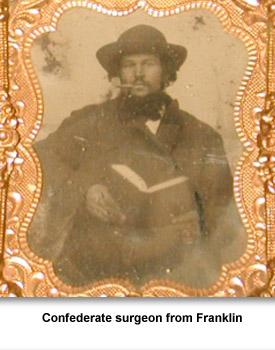 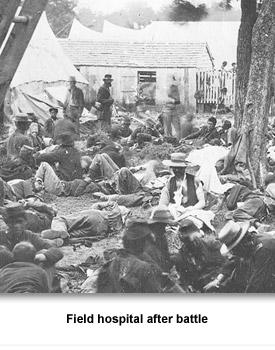 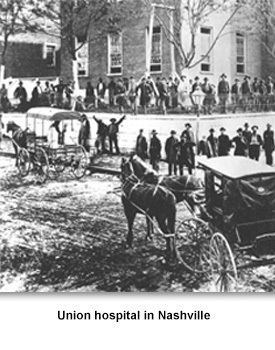 During the Civil War, more soldiers died from disease and poor sanitary conditions than from battle.  Measles, mumps, whooping cough, and dysentery were just a few of the diseases that regularly affected soldiers.

A 1908 Federal record of deaths of white Union soldiers from Tennessee indicated that out of 6,777 deaths, only 744 were from battle wounds.  The others were:


Doctors and nurses did not know about germs.  They would move from patient to patient  without washing their hands or instruments.  They would even wet the thread in their mouths to make it easier to thread needles to sew up wounds.

Doctors thought that pus in a wound indicated that the body was healing, instead of being a sign of infection as we know today.

Doctors learned that if they could amputate or cut off a wounded arm or leg within 24 hours of the injury, they could save lives.  Otherwise, the wound would become infected, followed by gangrene and death.  Doctors didn’t know how to do blood transfusions at that time, so that any significant loss of blood would bring on shock and death.

Read about the battlefield hospital at Shiloh.

Doctors tried to keep the wounds clean of maggots (hatched from eggs laid by flies), as it horrified patients.  But in 1863, doctors in a Confederate hospital in Chattanooga ran out of bandages and disinfectant and couldn’t change the patients’ bandages.  Maggots multiplied in the patients’ wounds.  Surgeons were surprised to dis-cover- the maggots ate only the dead tissue leaving a clean wound behind.

The war disrupted many private medical operations.  Military hospitals were widespread, but were often set up hastily in any available building or field.  Dr. Charles Todd Quintard , who served as a Confederate Chaplain in Tennessee, was also a surgeon, and was present at several Civil War battles.

Quintard observed at the Battle of Franklin how John McGavock’s estate was used as a both a hospital and holding place for the dead.  He was also horrified by the number of amputations and the gruesome conditions of the facilities.

Quintard’s description of a field hospital

The practice of medicine changed dramatically during the course of the Civil War. Improvements were made in health and sanitation.  Surgeon qualifications, nurse training, and transportation became better organized.

Dr. Samuel H. Stout, a native of Pulaski, Tennessee, began as a surgeon for the Third Tennessee Regiment.  He was quickly promoted to medical director of Gordon Hospital in Nashville, the hospitals of Chattanooga, and eventually all those serving the entire Army of Tennessee.  Stout improved hospital administration and saved more lives with better care.

Some Confederate armies were also equipped with dentists.  Dr. James Baxter Bean of Washington County, Tennessee was one of the finest dental surgeons.  He devised numerous procedures to treat facial gunshot wounds during battle.

Read more about medical care during the Civil War here.