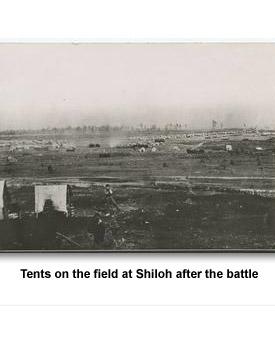 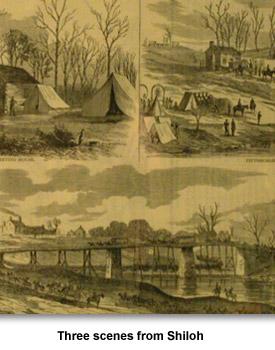 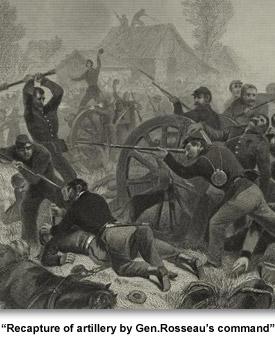 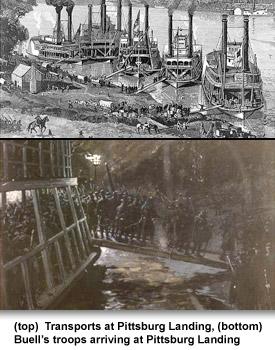 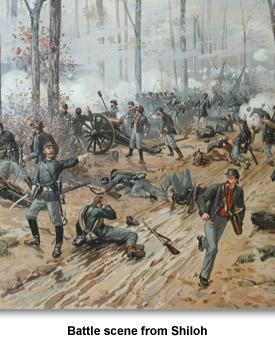 After the losses at Forts Henry and Donelson, Confederate forces retreated south to Corinth, Mississippi, located near the Tennessee border.

Why was Corinth important?  Two important railroads, the Mobile and Ohio, and Memphis and Charleston, crossed each other there.  These railroads were vital transportation resources for the Confederacy.

After capturing Nashville, the Union commander Major General Henry W. Halleck decided to attack these railroad lines.  He sent Ulysses S. Grant and his troops towards the railroads, and ordered Don Carlos Buell to join Grant with more troops.

Confederates burned bridges that Buell and his men needed to cross, and this slowed them.  Grant and his army reached Pittsburg Landing, Tennessee, near Corinth before Buell’s troops could join them.

Early in the morning on April 6, 1862, the ominous sound of cannon fire broke the stillness.  The Confederates led by General Albert Sidney Johnston had caught the Union soldiers by surprise near a little church called the Shiloh Meeting House.

Johnston had hoped to beat Grant’s army before Buell arrived and he almost did.  But some of the Union forces led by Grant and General William T. Sherman* held their ground.

After Buell learned of the attack, he rushed his men by transport (boats) to Pittsburg Landing to help Grant, landing at night.  Brutal fighting raged the next day as Union forces, now outnumbering the Confederate forces, pushed back.  (Ambrose Bierce’s description of battle)

Over the next two days almost 24,000 Confederate and Union soldiers were captured, wounded, killed, or missing, including Johnston who was killed the first day. The Confederates, now under the command of Gen. P.G. T. Beauregard , withdrew from the battlefield leaving victory to the Union.

The large number of casualties at Shiloh was shocking to people in the North and the South.  Historian Larry Daniels concluded:  “in two days, more men had been made casualties than in all the rest of America’s wars added together up to that time!  Romantic innocence had vanished; the war at last had turned vicious.”  Shiloh signaled that the Civil War was a new kind of war that would claim many lives and last a long time.

For more information about the battle, go to the official battle field site.