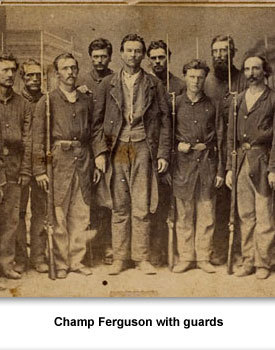 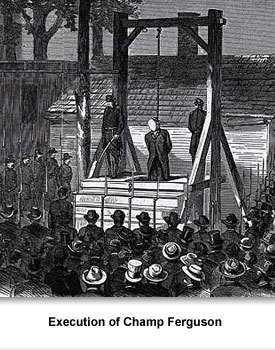 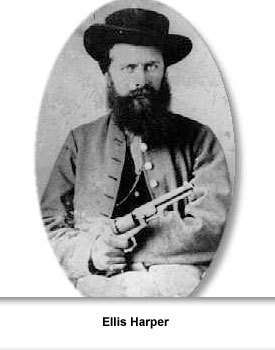 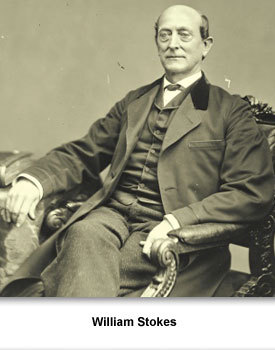 Every Tennessee community faced the threat of irregular warfare and the violence which followed in its wake.  Today irregular warfare would be called guerrilla warfare.
Irregular warfare usually involved a small group of men, not under the command of an army unit, attempting to damage the other side. These attempts could include burning bridges, derailing trains, attacking supply wagons, or even killing people.
There were both pro-Union and pro-Confederate partisans. In 1861 Confederate forces dealt with Union supporters who had attempted to destroy sections of the East Tennessee and Virginia Railroad. In early 1862 Union occupation forces in Middle and West Tennessee faced similar bands of Confederate supporters.
Irregular fighters, sometimes called bridge burners, guerrillas, spies, partisans, or bushwhackers, usually dressed in civilian clothing, not in uniforms. This allowed them to blend into the population after committing acts of sabotage or attacking soldiers or civilians.
These actions were considered outside the rules of civilized warfare, although each side probably encouraged such actions. Not surprisingly, some of these acts were committed for personal gain or revenge, and not for warfare. The lines between legitimate combatant and dangerous criminal became blurred.
Both sides used scouts whose missions were little different than that of spies. While scouts were considered combat soldiers, spies faced trial and execution. The difference between a spy and a scout was a gray area and often resulted in tragic consequences.
Here are some men who were irregular fighters. There were probably hundreds of participants in irregular warfare in Tennessee.
Ellis Harper
Harper was a Portland, Tennessee, native who first served in the Confederate infantry but formed a partisan unit in early 1863 under Confederate General John Hunt Morgan.
Harper’s scout company continually harassed Union occupation forces in Sumner, Robertson, Trousdale, Wilson, and Macon counties. They focused on interrupting the Louisville & Nashville railroad line.
Harper was considered an outlaw by the Union army but he continued operations until he surrendered in Gallatin in May 1865. He then went into hiding for nearly five years since he was concerned that he might be tried for war crimes. After he secured pardons from the governors of Tennessee and Kentucky, he moved to Lebanon, Tennessee, where he lived until killed during a political argument in 1908.
Samuel “Champ” Ferguson
Samuel Ferguson, known as Champ, was one of the most notorious guerilla fighters in Tennessee. Ferguson is an example of a guerilla fighter who allowed personal revenge and criminal activities to overlap his military actions.
After the beginning of the war, he organized a group of men and started harassing Union supporters along the Cumberland Plateau. He spent much of the war fighting Unionists from his own area.
His men scouted for Gen. Joseph Wheeler’s cavalry on two different raids and he served alongside regular troops at Saltville, Virginia. At Saltville he killed a wounded Union officer, still in the hospital, against whom Ferguson supposedly had a grudge. He was also charged with killing other wounded Union soldiers including several with the Fifth U.S. Colored Cavalry.
Ferguson surrendered at the end of the war, and thought he would be paroled. Instead he was arrested and tried as a guerilla. He was convicted of 53 counts of murder, and hanged in October 1865 in Nashville.
Dewitt Smith
Dewitt Smith served in the 45th Tennessee Infantry Regiment until late 1864, when he went on a partisan killing spree after his cousin, Dee Jobe, was tortured and killed by Union troops in August 1864.
News of his cousin’s brutal death sent Dewitt Smith into a rage. He deserted the army and went on a rage that resulted in the deaths of no less than fifty Union soldiers. Smith was badly wounded near Nolensville and returned to Murfreesboro, but he died from his wounds before he could be executed. The brutal treatment of Dee Jobe and the retaliatory actions by Smith illustrate the savage and violent nature of irregular warfare in Tennessee.
William B. Stokes
Stokes was a resident of Dekalb County who aligned himself with the Union in this fiercely divided region of Middle Tennessee. When Confederate partisans and guerrillas swept through Dekalb County, Stokes joined Union forces near Murfreesboro and formed the 5th Tennessee U.S. Cavalry Regiment.
He then waged a brutal campaign against guerrilla units and regular Confederate cavalry in the area of his home county. Stokes and the guerrillas opposing him terrorized the region in a never-ending cycle of violence. His regiment later served in the battles around Murfreesboro and Nashville, while he remained in Carthage commanding occupation forces and anti-guerrilla operations until March 1865.
Stokes lived in both Liberty and Alexandria after the war and served in the Tennessee House of Representatives until 1868. He died in 1897.