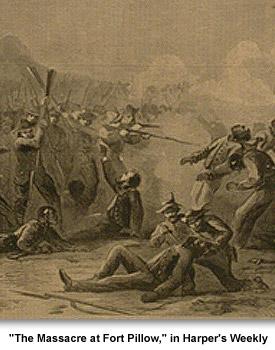 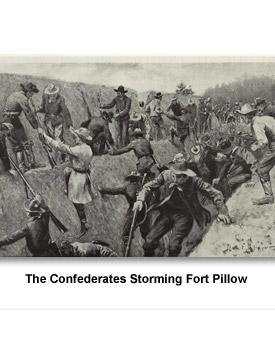 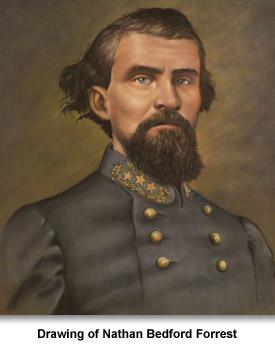 By 1864, all of Tennessee was in Federal control, but Confederates still conducted raids in the state.  A Confederate raid at Fort Pillow became one of the most controversial events of the war.

On April 12, General Nathan Bedford Forrest and his cavalry attacked Union soldiers at Fort Pillow which was located north of Memphis.  Around 580 African American and white Union soldiers manned the fort against 1,500 Confederate troops.

After some fighting, Forrest demanded the surrender of the fort with the promise that the men would be fairly treated as prisoners of war.

If they refused, he said, “I cannot be responsible for the fate of your command.”  It was a threat that Forrest and other commanders had made before.  The fort’s commander, Union Major William F. Bradford, refused to surrender.

Forrest’s men attacked and successfully captured Fort Pillow.  However, in taking the fort, Forrest’s troops killed many of the African American Union soldiers guarding the fort.

Historian John Cimprich explained:  “Deaths totaled 64 percent of the black troops and at least 31 percent of the whites.  Forrest alleged that the Federals refused to surrender until most had died; Federal survivors claimed that a massacre took place.”

Read the quotes from survivors of the battle.

Almost immediately after the raid, outrage about Forrest’s men’s treatment of African American soldiers spread.  Many newspapers throughout the North reported on the incident as a massacre, and the United States Congress sent a senator and a representative to investigate.

Some Union African American soldiers wore special patches on their uniforms saying “Remember Fort Pillow” and fiercely fought against Forrest and other Confederates during the rest of the war.  A Wisconsin soldier with General William Sherman’s army wrote his fiancée that when his regiment charged Confederate lines at Resaca, Georgia, in May 1864, “23 of the rebs surrendered but the boys asked them if they remembered Fort Pillow and killed all of them.”

There almost certainly were Confederate soldiers who shot and killed Union soldiers who had surrendered.  Also there were a significantly higher percentage of black soldiers killed than white.  Confederates generally did not consider captured African American Union soldiers as prisoners of war.  Instead, they were considered property and could be re-enslaved.

The controversy then and today is how much was Forrest to blame for the killings?  Historian Jack Hurst said:  “Whether he (Forrest) actually intended this time to carry out the no-quarter (kill all enemy soldiers) threat he had made so many times before, and whether he actually ordered his soldiers to do it, will likely never be learned for certain.”

While some historians believe that there was no order given to kill all the combatants,  there was a brutal killing, beyond normal battle fatalities.  These acts appear to be the work of soldiers who were tired, bitter, and angry that blacks had taken up arms against them.  And, according to historian Brian Steel Wills, “as the overall commander of troops on the scene, Nathan Bedford Forrest was responsible” for letting the situation get out of control.